Mergers of binary neutron stars (NS-NS) or a neutron star (NS) with a black hole (BH) are expected to be strong transient gravitational wave sources at high frequency (1～104 Hz) with significant electromagnetic counterparts. The potential EM is dependent on the post-merger products. The leading counterpart is short GRBs (sGRBs) which are believed to be produced via accretion of merging materials into the central BH formed during the merger. There are also the optical/IR signal, in the name of ‘kilonova’ or ‘macronova’, powered by the radioactivity of the neutron-rich materials launched during the mergers and the afterglow-like emission from the interaction of non-relativistic ejecta with the ambient medium. The presence of a highly massive magnetar as the NS-NS merger product can lead to a magnetic dissipation X-ray afterglow, which may be the origin of the plateaus seen in the X-ray light curves of some short GRBs. Such massive magnetars have been shown to form from mergers of NS binaries of modest mass. Initially rotating with a period of about 1 ms, these objects have a huge potential spin-down energy which can power an isotropic magnetar wind; it has been shown that the emission from this peaks at soft X-ray energies, and has a detectable flux for up to 3 hours. This wind can also enhance the merger nova output. The ejecta-ISM shock can also have energy injected from this wind; the X-ray, optical and radio peak fluxes and timescales being diagnostic of the magnetic field and ejecta mass. Because isotropic emission is expected, it is important that early X-ray observations of GW transients are performed; these are best achieved with a large field of view high-cadence survey with rapid follow-up capability.

In either a BH or a magnetar left from the merger, one can observe a highly-relativistic sGRBs when the jet is beaming towards the line of sight. One can also detect sGRBs and X-ray afterglow powered from structured jets with relatively larger opening angles. Off-axis sGRBs have a much higher event rate than on-axis ones, therefore, their X-ray afterglows and possible prompt X-ray transients from mildly relativistic cocoon can be potential interesting targets for EP in synergy with future GW detectors. The detection of early X-ray afterglow in association with GW events is essential for determining the nature of post-merger products. With its wide field of view, EP is a promising mission to catch early X-ray afterglows of GW events.

Multi-wavelength EM counterparts have been detected following the remarkable event GW 170817 from a binary neutron star merger. Although no sGRB-less X-ray emission was detected at the very early stage after the merger, it is not clear whether this was due to the lack of sensitive observations. Despite this, the first candidate of the strong X-ray radiation associated with mergers of binary neutron stars has been reported by Xue et al. 2019 (e.i., CDF-S XT2, Figure 2). With the combined high sensitivity, large field of view, maneuverability and rapid alert downlink capability, EP has great potential in detecting the EM counterparts of GW events by synergy with the next generation of GW detectors. 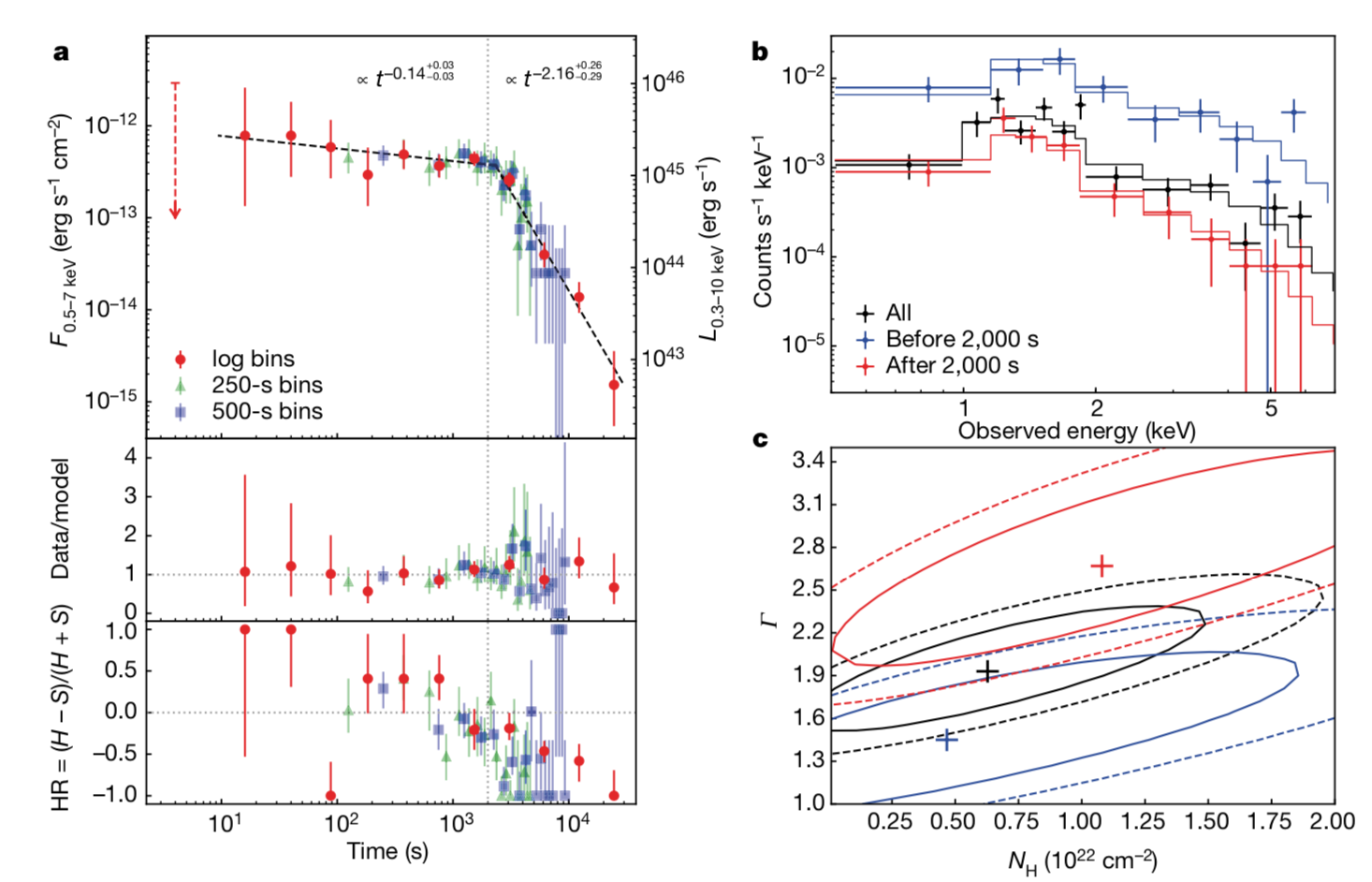